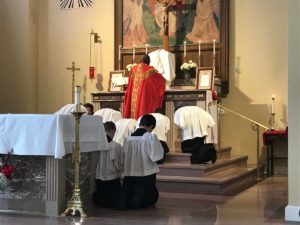 The next Mass in the Extraordinary Form will be offered on Sunday, June 20 at 2 pm. This will be a Low Mass.
The propers for the Fourth Sunday After Pentecost can be found HERE.

You can watch the Mass in the Extraordinary Form every day at parishes across the world at LiveMass.net

For information on other Latin Masses in the Richmond and Arlington Dioceses, please see the “Virginia” section of this page at the Coalition in Support of Ecclesia Dei.

Holy Comforter Catholic Church is proud to offer Masses in the Extraordinary Form of the Roman Rite every Sunday and on special feast days.

That includes the highest-ranked feasts of Christmas (Midnight), Easter and Pentecost, as well as Ash Wednesday, Ascension Thursday, the Immaculate Conception and the Octave of Christmas.

Holy Comforter also offers a Requiem Mass every All Souls Day and, by request, Requiem Masses for funerals. 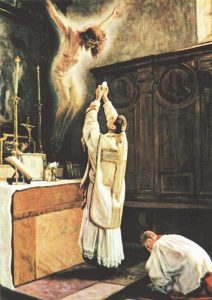 The “Tridentine” Rite is the form of the Mass published in the Roman Missal from 1570 to 1962. Though widely believed to have been abrogated and suppressed by the institution of the Mass of Paul VI in 1970, today called the “Ordinary Form,” this was actually not the case. Pope Benedict XVI in his 2007 encyclical Summorum Pontificum made it clear that the Tridentine Rite was never abolished and can and should be celebrated wherever the people ask for it.

Though a different form of the same Roman Rite Mass, the Tridentine Rite also follows a separate liturgical calendar. That means that certain feast days will fall on different days and certain feasts celebrated today are absent from the previous calendar. The Tridentine Rite also has the season of “pre-Lent” and uses ordinal counting between seasons instead of referring to “Ordinary Time.” That means, for instance, September 3, 2017, was referred to as the “13th Sunday after Pentecost” as opposed to the “22nd Sunday in Ordinary Time.” Sundays following the Epiphany, but before Septuagesima, are simply referred to as the “Nth Sunday After the Epiphany.”

Click here for more information on the ordo, or liturgical calendar, for the Extraordinary Form.

To receive all the latest information on the Traditional Latin Mass at Holy Comforter, including any changes to the usual schedule, subscribe to the parish’s Flocknote.

Parishioners, non-parishioners and visitors are always welcome at this Mass and every Mass celebrated at Holy Comforter.

Getting involved in the Latin Mass at Holy Comforter

Because the Extraordinary Form is more complicated than the Ordinary Form, we are always looking for potential acolytes who are interested helping us celebrate this form of the Mass. Per the specific rubrics of the Rite, serving at this form of the Mass is open to boys and men. If you believe the Lord is calling you and/or your sons to serve at this Mass, please contact our Seminarian William Yearout.

We now have Men’s and Ladies’ Scholas that chant at all Sung Masses. We also have a fledgling Children’s Schola as well. If you are interested in Gregorian Chant, please contact our music director, Daniel Kirkland, via email. You can also speak with him after a sung Mass to find out how your voice can add to the beauty of the sacrifice.

Request Mass Intentions
Call the office or email the receptionist

Angelus:
Monday thru Friday at 12 PM